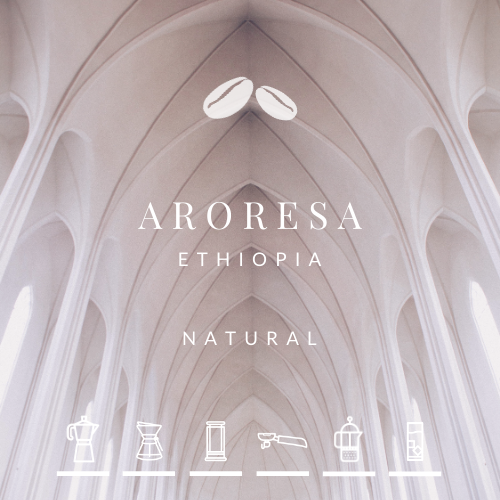 Aroresa (pronounced “A-ro-ress-a”) originates from Ethiopia’s renowned coffee region, Sidamo, in the south-east of the country. It is named after the ‘woreda’ (administrative district) of Aroresa. The washing station is privately owned by Wochesa Achiso, who works collaboratively with Testi Coffee, a family-owned exporting company, who help manage quality control at the washing station and support Mr Achiso in marketing and selling his coffees. Aroresa produces both washed and natural coffees.

The washing station sits at 1,856m above sea level, in the steep foothills of the Bale Mountain Range. Coffee is delivered daily to Aroresa by between 650-750 local coffee growers. The majority of these families farm organically on tiny plots of land, which average just 2–5 hectares in size. Coffee is their main cash crop and grows alongside food crops of corn, grain and bananas, under the shade of native Birbira, Wanza, and Acacia trees. The average elevation of the farms in this region is very high – around 1,900–2,000m above sea level – and this, combined region’s cool is ideal for the slow ripening of coffee cherries, leading to denser beans and a sweeter, more complex cup profile.

This coffee lot was produced as part of Testi’s quality improvement initiative, Premium Cherry Selection (PCS). Launched in 2018, the Premium Cherry Selection program ensures that best practices are used for growing, harvesting and processing the coffee cherry. Through the program, Testi pay a premium to farmers who pick and deliver only the ripest cherries from their farms. Coffees produced as part of the program represent the highest quality and cleanest cup profile available from the washing station and wider region.

Save this product for later

Thank you for visiting Allbrew Coffee.